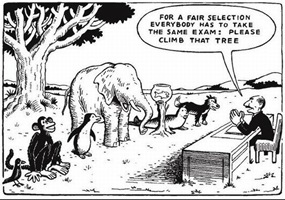 The purpose of higher education in society is debatable.  Among sociologists, the views of functionalists and conflict theorists differ.  Functionalists argue that education must teach students about the rules and norms of society.  From their perspective, which rests upon the assumption that society in its current form is basically good, higher education should produce the enlightened citizens with the knowledge, skills, and attitudes necessary for modern democracies to operate.  However, from a conflict, or Marxist, perspective, hierarchical societies are assumed to be the problem, and higher education is viewed as perpetuating and exacerbating social injustice.  Societies, even those claiming to be egalitarian democracies, are inherently hierarchical and, thus, privilege some citizens over others.  Gender, race, ethnicity, ability, present lines of demarcation that distinguish those who benefit from those who benefit less or not at all.  Paulo Friere’s Pedagogy of the Oppressed (1970) asserts the appropriate role of education should be enlightenment and the realization of the ways in which oppression causes suffering.  Postman & Winegartner’s (1969) recommendation that students must learn to be first rate “crap-detectors” is consistent with this view. On the other hand, Pinker (2018) suggests the Enlightenment is more closely aligned with the functionalist perspective, while many taking the conflict perspective adhere to views characteristic of “counter-enlightenment”.

While most faculty members can see value in both these perspectives, those who find themselves strongly committed to either extreme may seek to suppress expressions supporting the opposite perspective.  For both sides, this is a matter of organizational justice.  As Rawls (1971) observed, justice is “the first virtue of social institutions (p. 3).”  Current concepts of justice involve three different kinds of justice: distributive, procedural, and interactional justice (Colquitt, et al., 2001).  Distributive justice deals with who receives the organization’s goods, services, and other benefits.  Most people also believe that the treatment of individuals should be equitable and fair (i.e., “equal justice before the law”).  The rules are the rules, and their application should not be biased by individuals’ demographic characteristics.  This is procedural justice.  Interactional justice is also important.  It includes both interpersonal and informational justice. Treating people respectfully is the essence of interpersonal justice. Informational justice concerns the quality, consistency, and consequences of information provided by the organization about itself (Muchinsky, 2009).  Truth and transparency are the characteristics of institutions perceived to exhibit informational justice. The match between what an organization promises and how it performs is a matter of institutional integrity and this is the essence of interactional justice.  The community’s perception of the administration’s ability to balance concerns for all three types of justice determine the overall sense of organizational justice.  Commitment to an organization perceived as being less than just is likely to be superficial and ephemeral at best.

There are other tensions among these different forms of justice emanating from individuals’ different philosophical and political allegiances.  In his 1965 essay, “Repressive Tolerance,” Herbert Marcuse, a modern Marxist theorist, pointed out that adherence to procedural justice in the form of free speech and tolerance is likely to increase disparities in access to and the accumulation of power.  Thus, he advocated “liberating tolerance” rather than equal justice as the appropriate administrative standard.   “Liberating tolerance” maintains that disadvantaged individuals should be given privileges not afforded to others, especially those already occupying positions of power.  Therefore, restricting the freedoms and benefits of those assumed to be “advantaged” may be necessary.  Among the most important of these markers of demographic privilege are gender (male or “cis”), race (white), sexual orientation (hetero), class (upper), and physical ability (“abled” rather than disabled).  Thus, according to Marcuse, in the interest of achieving distributive justice, it is not only permissible, but necessary, to enhance the procedural rights of the dis-advantaged and limit the procedural rights of the already-advantaged. Members of the campus community often support awarding special opportunities to members of previously disadvantaged groups in the form of special workshops, scholarships, preferential hiring and placement, and sabbatical support (i.e., affirmative actions).  However, as Lukianoff and Haidt (2018) suggest, such disparities in treatment can have unforeseen negative consequences.  When the differential treatment involves denying due process, the withdrawal of support for First Amendment rights, or failure to protect academic freedom, judicial review may be warranted (Bonnell v. Lorenzo, 1999; Rodriguez v. Maricopa County Community College, 2010; McAdams v. Marquette University, 2018).  Thus, the institution must balance its commitment to effectiveness and productivity with its commitments to distributive, procedural, and interactive justice.  Over-emphasizing any one of these forms of justice is likely to create problems and undermine morale.

Steven Pinker (2018) provides an emblematic tale from the Soviet era that illuminates the dangers of elevating the goal of equality too far above substantive objective matters.  It goes something like this: Boris and Igor are two Russian peasants suffering under the new communist regime shortly after the revolution.  They have each been assigned identical plots of land and each has a wife and several children to help them eke out their meager agrarian existence.  The only difference in the two men is that Igor has one old, very scrawny, and decrepit goat.  Early one morning, a fairy queen magically appears.  She offers to grant Boris one wish, anything his heart desires.  Without pausing to consider the possibilities, Boris spontaneously replies, “I vant that Igor’s goat should die!” …And so, it did.

As Whittington (2018) asserts, “Universities could be the seat of diversity and learning, but they could also be perverted into the seat of conformity and indoctrination.  Forces both inside and outside the academy could collude to prioritize politics over scholarship on the university campus to the detriment of both the institution and civil society” (p. 3).  Near the conclusion of her text, Fascism, Madeleine Albright (2018) describes two distinctly different but equally dystopian nightmares, both relating to fascism’s oppression of society.  Here is how she describes her first bad dream:

“From cradle to grave, an increasing number of citizens spend their lives within a conservative echo chamber, where they watch nothing but Fox News, memorize the Breitbart catechism, and learn only what goose stepping right-wingers want them to know… heavily armed civilian militias are organized to protect private property made bold by the promise of presidential pardons should anyone pull a trigger in “self-defense” (p. 231).”

This is the vision that many academics steel themselves against.  We hope that learning to think critically will make students into allies who will help save us from this external threat to everything we hold dear.  Equally ominous, however, at least for those who support free speech and reject all forms of fascism, here is a description of Secretary Albright’s second nightmare:

“Candidates elected by wealthy liberals… conspire to enforce rigid standards of political correctness across all major institutions of society – government, police, media, sports, theater, universities and kindergarten classrooms.  Anyone who violates these vague and unwritten norms, or is accused of having done so, is labeled a bigot and fired.  Right-wing speakers are barred from public gatherings because their exercise of free speech might injure the sensitivities of club-wielding anti-Fascists… an increasing number of citizens spend their entire lives within a Socialist echo chamber, learning only what Fascist liberals want them to know (p. 231).”

As a military commander, I regularly administered the Oath of Office at promotion and re-enlistment ceremonies.  Each member of the military (as well as all other government employees) swears to “support and defend the Constitution against all enemies, foreign and domestic.”  Higher education must now contend with its own enemies, both “foreign and domestic.”  By and large, the enemies of free speech on the right are external to our academy.  Their ranks may include politicians, donors, and members of distinctly un-American (claiming to be ultra-American) fringe groups.  On the other hand, the enemies of free speech within the academy pose an equally serious threat.  Liberal activists, self-proclaimed social justice warriors, confident of the infallibility of their perspective and the righteousness of their cause, are eager to exclude the voices of those with whom they disagree (viz., liberals, moderates and conservatives alike).  They confess a willingness to shout down or even employ violence to prevent the expression of views and ideas they believe could be harmful to the “well-being” of others.  A survey of 1500 public university students showed that about half of these students believed that it is appropriate to interfere with speech they believed to be potentially harmful or hurtful to others (Villasenior, 2017).  Although some of my faculty colleagues might be disappointed that any of Berea College’s students would endorse such illiberal beliefs, most will be heartened to learn that a recent survey of our students revealed that the endorsement rate was only about half as large as at other public schools and universities.

Nonetheless, disagreement and conflict about these issues is inherent in contemporary higher education.  Alger and Piper of James Madison University addressed the appropriate role of administrators in mediating and arbitrating such conflicts in the most recent edition of the American Association of University Professor’s Academe magazine:

“… if evidentiary support is provided, leaders of educational institutions should not censor or punish their faculty for sharing unpopular or even offensive views. History shows us that many views that were unpopular or offensive at one time have come to be viewed as correct. And administrators must not presume that they always have a monopoly on the truth.”

Both the functionalists and the conflict theorists and their intellectual progeny, ensconced on the extreme right and left of the political spectrum, presume to already know how society works and assume that higher education’s role is to persuade students to agree with their viewpoint.  This issue has been of central importance to judicial considerations and intervention into academic issues over the last century.  As Supreme Court Justice Oliver Wendell Holmes wrote in his dissent to Abrams, it is more important to commit to a fair and open learning process infused with free speech than to adhere to any particular “fighting faith” that presumes to have captured ultimate truth.  As Holmes, concluded, all life is an experiment.  Thus, it is essential that colleges and universities provide the necessary accoutrements for students to learn about skepticism, the scientific method, and how to use them to reveal and distribute often fragile, ephemeral, and incomplete truths.